You walk up to the second floor of MOMA and find the centerpiece of Marina Abramovicz’s retrospective – a live durational performance piece titled “The Artist is Present” featuring Abramovicz herself sitting motionless at a table across from, well, whoever decides to sit down with her. When she first performed the piece in the 1970’s, it was with her then lover and collaborator Ulay (Uwe Laysiepen). But now instead of staring intently into the eyes of a trustworthy companion, Abramovicz stares down any and all comers. The day before I visited, a young woman had dressed up exactly like Abramowicz, in a long flowing blue dress, and she sat down across from the maestro in exactly the same position, determined to wait her out. The stare down lasted the whole day and the young woman, a performance artist herself, titled her piece “Anxiety of Influence.” Unlike an earlier male performance artist who had sat across from Abramovic and tried to distract her with various antics (he called his piece “The Other Artist Is Present,”) Anya Liftig’s “Anxiety of Influence” paid homage in kind rather than  trying to share the stage. See the interview with the artist here: http://bombsite.powweb.com/?p=8919

Abramovic’s works are shocking (risking death), moving (evoking tears and anger), irritating (literally in the sense of flesh rubbing on flesh as well as figuratively in the sense of different frames of reality grinding against each other), grating (as in set your teeth on edge):

they are perhaps best appreciated through re-performance in the sense that it is difficult to apprehend the degree of difficulty of any given performance simply by hearing an account of it.  Many of her pieces are re-performed at MOMA for this special retrospective by students. Some hold their poses gracefully on crucifixes and against walls, others weep with effort, grimace, sweat, grin and bear it. What makes the pieces so difficult to perform and re-perform? Sometimes the source of agony is obvious: sitting naked on a saddle projected from a wall while holding a crucifix pose seems excruciating, but sitting back to back with a partner with whom one’s hair has been plaited, seems more like a study in patience than pain.

And yet, it was the woman in the latter performance who was weeping and the woman in the former who looked cool and comfortable. One student re-performer lay naked under a skeleton (“Nude With Skeleton”) looking out at the gallery goers and occasionally catching someone’s eye, she too seemed composed. Was it the fact of being able to make eye contact that helped some performances feel bearable while others, a performance where you sit back to back for example, were about the shunning of contact and intimacy?

Or, as in the central performance by Abramovic herself, was it the contact with another in a mode of alienated intimacy that was painful – looking but not looking, seeing but not seeing, connecting but not connecting? Abramovic is the artist of unbecoming. What is hard is the performance that discovers disconnection through an act that should be about connection.

For me, Marina Abramovicz’s work falls into a category of thought, performance and art that I call “shadow feminism.” In this genre, we find no “feminist subject” but only un-subjects who cannot speak, who refuse to speak; subjects who unravel, who refuse to cohere; subjects who refuse “being” where being has already been defined in terms of a self-activating, self-knowing, liberal subject. We find a feminism that stages a refusal to become woman and that locates this refusal deep in the heart of masochistic pain/pleasure dynamics?

With the notable exception of work by Linda Hart’s work on Fatal Women and Gayle Rubin’s early essays on S/M, power and feminism, masochism is an underused way of considering the relationship between self and other, self and technology, self and power in queer feminism. This is curious given how often performance art of the 1960’s and 1970’s presented extreme forms of self-punishment, discipline and evacuation in order to dramatize new relations between body, self and power. Freud referred to masochism as a form of femininity and as a kind of flirtation with death; masochism is in fact, he says, a byproduct of the unsuccessful repression of the death instinct to which a libidinal impulse has been attached. While the libido tends to ward off the death drive through a “will to power,” a desire for mastery and an externalization of erotic energy, sometimes, libidinal energies are given over to destabilization, unbecoming, and unraveling – this is what Leo Bersani refers to as “self-shattering,” a shadowy sexual impulse that most people would rather deny or sublimate –if taken seriously, unbecoming may have its political equivalent in an anarchic refusal of coherence and agency.

A remarkable amount of performance art—feminist and otherwise—from the 1960’s and 1970’s experimental scene explored this fertile ground of masochistic collapse. Faith Wilding’s performance piece, “Waiting,” charts the life narrative of women as a series of unfulfilled wishes, as anticipation without end and as suspended life. Chris Burden allowed himself to be shot in his performance piece “Shoot” from 1971. In 1974 in “Rhythm 0” Marina Abramovic invited her audience to use and abuse her with 72 objects she laid out on a table. Some objects could give pleasure, some inflict pain, the weapons included a gun and a single bullet. Abamovic had this to say after the performance: “The experience I learned was that…if you leave decision to the public, you can be killed…I felt really violated: they cut my clothes, stuck rose thorns in my stomach, one person aimed the gun at my head, and another took it away. It created an aggressive atmosphere.”

In 1965 at Carnegie Hall NYC, almost ten years earlier, Yoko Ono sat on a stage, fully dressed and gave her audience a pair of scissors. Yoko Ono’s nine minute long performance “Cut Piece” involves the artist sitting on stage while members of an audience come up and cut pieces of her clothing off. The act of cutting here is assigned to the audience rather than to the artist and the artist’s body becomes the canvas while the authorial gesture is dispersed across the nameless, sadistic gestures that disrobe Ono and leave her open to and unprotected from the touch of the other. The audience is mixed but as the performance unfolds, more and more men come to the stage and they become more and more aggressive about cutting her clothing until she is left, semi nude, hands over her breasts, her supposed castration, emotional discomfort, vulnerability and passivity fully on display. How can we think about femininity and feminism here in the context of masochism, gender, racialized display, spectatorship and temporality?

While many feminists from Simone de Beauvoir to Monique Wittig to Jamaica Kincaid have cast the project of “becoming woman” as one in which the woman can only be complicit in a patriarchal order, feminist theorists in general have not turned to masochism and passivity as potential alternatives to liberal formulations of womanhood. The archive of masochism that Marina Abramovic puts on display at MOMA is also an archive of shadow feminisms – feminisms rooted in pain and desire, struggle and desire, broken relationships and desire. Like some of the images in Lady Gaga’s recent video output that Tavia N’yongo and I have analyzed here on Bullybloggers, the versions of womanhood preferred by Abramovic join lack of affect to S/M scenarios, nakedness to a refusal of truth and disconnection to an anti-identitarian set of impulses. Like Gaga’s archive, Abramoviz’s performance history is shot through with violence, pleasure and nonsense making gestures. Like Gaga, Abramovic wills herself to become an object and as an object she stands in potent opposition to all of the clichéd forms of rationality that collect around embodied subjectivity. More and more, the artist is object. Here today, Gaga tomorrow.

5 replies on “The Artist Is Object – Marina Abramovic at MOMA”

Thanks for an interesting historical review of Marina A’s performance art. It would have been nice to also cover how THIS performance developed and what it represented. For those interested, as I watched it live and online at the time, I put together notes on this one page blog of sort, centralizing various other posts: 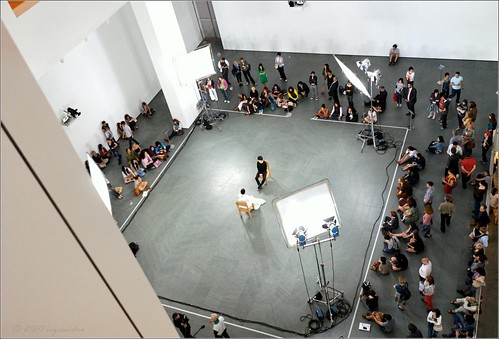 I find it courageous of you to cite GaGa in a visual arts article that is supposed to be taken seriously. I do take it seriously. Congrats 😉

[…] think this tradition or mentality is an exclusively white cis male thing—VALIE EXPORT, Yoko Ono, Marina Abramović, and many others artists of various backgrounds have made art that’s rooted in actually […]