In previous posts on the Gender and Sexuality Law blog, I have questioned the wisdom of recent tactics of the marriage equality movement to force the disclosure of the names of all people who have contributed to “anti-gay marriage” referenda or propositions.  As I said before:

The current political and legal strategy to force disclosure of supporters/contributors to anti- marriage equality measures smells a lot like the strategies that were used by racists, anti-communists, anti-unionists, and others in the 1950s and 1960s when they demanded that organizations such as the NAACP, the ACLU, the National Lawyers Guild, unions, SDS chapters, the Social Workers Party among others divulge their membership lists.  There was a spate of Supreme Court cases in this period that found pretty consistently that these disclosure laws violated the First Amendment associational rights of the members of these organizations.

Well, I have new reason to be concerned about these kinds of tactics in the lgb community.  Last Thursday I attended a conference on “lawfare” at the stuffy New York County Lawyers’ Association.  (I attended largely because the Columbia Law School Dean was chairing the event and providing the closing remarks.)  The conference was a one-sided, biased affair, featuring among others, John Bolton, Gabriela Shalev Israel’s ambassador to the UN, Richard Heidemann and David Matas legal advisors to B’Nai Brith, and NGO Watch lawyer Anne Hertzberg.  The panelists took frequent aim at the UN (Bolton wasn’t the only one), compared the UN Human Rights Council’s recent report criticizing Israel’s invasion of Gaza (led by Richard Goldstone) to “anti-Semitism by gangs in the street,” charged Human Rights Watch, Amnesty International and the Center for Constitutional Rights as “anti-state, anti-democracy, and anti-American” and intimated that these groups work with, if not for, Hamas and the Saudi government.  As Scott Horton noted about the event, it was an odd setting in which to hold such an unabashed human rights law bash-fest, given that “generations of bar leaders stared down from the walls—many of them key players in the 1949 Geneva Conventions, the Convention Against Torture, the Genocide Convention, and other mainstays of the world’s human-rights legal infrastructure.”  Max Blumenthal has more coverage of the event on his blog.

But most importantly, for present purposes, was the frequent call made from panelists that human rights organizations operating in Israel, particularly those that are critical of the Israeli government, must disclose their funders.  There is a bill pending in the Israeli Knesset that would require just that, and would revoke tax exempt status from any organzation that receives foreign funding.  The bill’s introduction was motivated by Likud concern that groups such as the International Center for Transitional Justice and the New Israel Fund were funding work in Israel that called the state out for human rights violations. 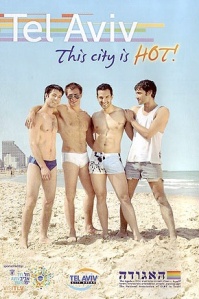 And yes, there is an lgbt angle to this story as well.  The Israeli government has undertaken a self-conscious and well-funded campaign to rebrand itself, termed alternately “Brand Israel” and “Israel Beyond the Conflict.” According to the Israeli government – whether Labor, Kadima or Likud – a modern, democratic, and tolerant state should respond with empathy and outrage when “their homosexuals” are attacked.  Indeed, for some this is what distinguishes a state such as Israel from, for instance, its Muslim and Arab neighbors.  Various pro-Israel advocates, including the Israeli government, have seen a strategic advantage in comparing Israel’s tolerance of gay people with intolerance toward gays in neighboring Arab and Muslim countries.   Last May, the Israeli Foreign Ministry, concerned that the international community held an unfairly negative view of Israel, launched an extensive public relations campaign, as then-Foreign Minister Tzipi Livni put it, “to make people like us.” “We decided to improve Israel’s image through the gay community in Israel” said an official with StandWithUs to the Jerusalem Post.

Accountability to human rights norms can be a good thing, except when it isn’t, this example shows us.  I have much more to say about this in an article I have just finished, Ahmadinejad Comes To Columbia: The Perils Of Standing Up For The Gays.  But for now, it is worth noting the ways in which transparency norms can be tricky: demanding disclosure of financial supporters for unpopular causes – whether done by the left or the right – is something to be concerned about insofar as it has the whiff of McCarthyism to it.