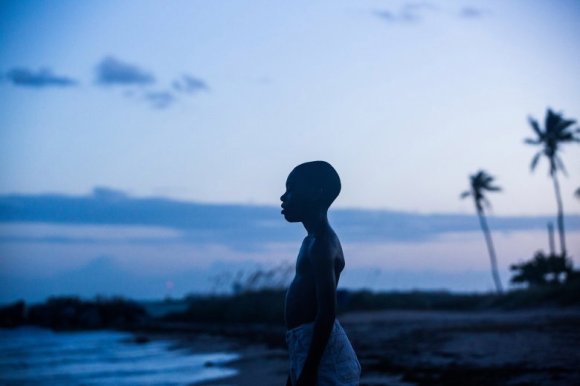 In director Berry Jenkin’s new film Moonlight (2016), the intimate view on Black queerness astonishes. While the film is a painful coming of age story, it is also a lively rendition of alternative frameworks of embodiment where the powerful ocean, or sea body, is omnipresent and rendered as a space of longing, transgenerational memory, migration, and witness represented by water and light. During a recent viewing of Moonlight with a group of friends at Lincoln Center, I was surprised to find myself so completely absorbed in the filmic experience as to feel saturated by the film’s sensuality, or what Laura Marks’ might call its haptic sensuality “where even small events are arenas for a universe of feeling” (2002: p.1).

Moonlight is not an easy viewing experience, not only because of the homophobia that is directed against Chiron (Alex Hibbart). It is also because the shy nine-year old rarely experiences relief from multiple forms of violence and subjectification that brutalize his psychic and physical form. The film is indeed organized around how Chiron’s Black queer personhood is conditioned by the drugs and violence of Reagan-era Miami and by the taunting racialized violence of adolescent masculine becoming. In a moment of

exteriorizing others prejudices, Chiron thoughtfully turns his head and asks his mentor Juan (Mahershala Ali) “What’s a faggot”? Even though he is the local drug dealer, and regularly supplies to Chiron’s mother Paula (Naomie Harris), Juan is also a gentle protector and ally. After exchanging glances with his girlfriend Teresa, exquisitely played by Janelle Monáe, Juan responds to Chiron’s startling, yet knowing question with a simple and profound statement, “It’s something people say to make gay people feel bad.” Teresa becomes a resonant presence in the film. Throughout his childhood and adolescence, Chiron, aka “Little,” returns to Teresa’s house to eat, sleep, and to generally find a cocoon within an environment that otherwise offers little respite. With an ethics of care that is carried out with a playful tinge of an island accent, Teresa figures as the source of acceptance, hope, and loving support, especially within a US landscape where “being oneself” is anathema to a culture that devours and disposes of its Black queers.

If Teresa’s care for Chiron represents a rich portrait of island relationality and the ability to address differential power and political economies of difference through non-reproductive intimacy, there are several other moments in the film where Miami is thoroughly infused by what Jacqui Alexander refers to as diasporic crossings (2006). For Alexander, feminist and queer crossings are a site for trans-generational memory, where historical and layered crossings force open a reckoning with the embodied meaning of the sacred, and, the spiritual dimensions of experience. Amidst a hardened world where the worst forms of structural violence impose themselves upon Black queer bodies, there is an excess that looms large in the film, one that cannot be absorbed simply by naming Moonlight a coming of age story. Alongside and as a direct witness to Chiron’s story is the aliveness of the sea, the body of water that stretches between the Caribbean Islands to the Biscayne Bay, and it too becomes a protagonist in the film.

Whether as a view from the window, or lapping alongside Little and Kevin’s sexual encounter, or as an enveloping presence as Chiron first learns to swim, in a palette that moves between midnight black to light turquoise green the oceanic touch and feeling is never far. Describing the “newness” of Moonlight in a review for the NY Post, David Kaufman recently said, “There has literally never been a film like it.” US cultural criticism often contains this kind of hyperbole and ethnocentric management of racialized and gendered representations. 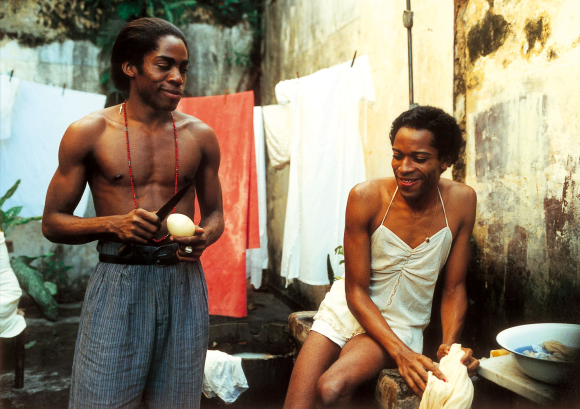 We might counter such exaggerated declarations by noting Karim Aïnouz’s extraordinary Madame Satá (2002), a film that chronicles the life of legendary Queen and performance artist Joao Francisco, or point to the Cuban film Fresa y Chocolate (1993), directed by Tomás Guitierrez Alea and that complexly considers queer nightmares, although admittedly race is scantly addressed in the film. It may be true that Moonlight is different from many of the recent Hollywood films that feature Black masculine subjects, such as Nate Parker’s The Birth of the Nation and 12 Years a Slave, as The NY Post compares. And, it’s true that Moonlight clearly shares important resonances with Pariah (2011), whose cinematographer Malik Hassan Sayeed uses blue and pink hues in novel ways. However, if we considered a broader world of filmmaking and influences, a more apt comparison might include 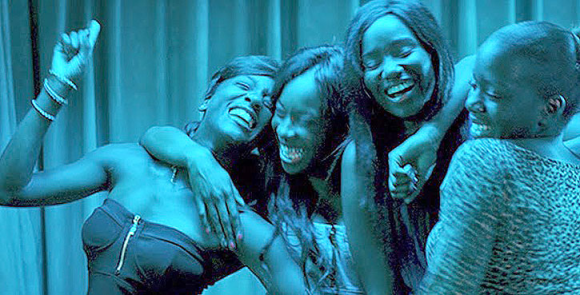 Girlhood (2014), director Céline Sciamma’s coming of age film about a French immigrant young woman growing up in public housing in suburban Paris. Both Moonlight and Girlhood share how race, sexuality, desire, and vulnerability are central to the experience of living on the margins, and how every day violence in the lives of Black youth compounds the need for embodied modes of escape. Similar to Moonlight, where the color blue is a filter, a costume, a painted wall, in Girlhood blue functions as a contrast to the overseen use of murky palettes. In dominant representations, dull and mutated tones visualize “the margins,” “the inner city” and “the outskirts” as spaces of lifeless blight. To counter such conventions in both films the color blue, in all its shaded richness, becomes the medium for a parallel narrative of an outside to extreme pressure. In short, the color blue offers the potential space of freedom as the imaginative and the intuitive. In the case of Girlhood, a vibrant and pulsating blue infuses the most important scene in the film, a scene that is organized around a beautiful and exuberant dance amongst friends to Rhianna’s song “Diamond.”

In one of the most moving and much discussed scenes in Moonlight, including in Tavia Nyong’o’s piece posted on this blog, the camera lingers on undulating waves and Chiron’s black body as his head is gently cradled by Juan. Teaching Chiron how to swim, the two Black bodies float alongside and entangled with each other in a lingering choreography of embodied sensation, floating between jade and shimmering waves. At various points during the scene, the camera half submerges underwater, capturing limbs and embodiment both above and below the water’s changing surface. This submerged visuality is not only about the camera’s dipping below the overlay of human relations, or about forgetting the conditions of violence that surround Chiron. Instead, the scene of non-scripted intimacy offers another way to see Chiron’s supposed submission to the world of hetero-masculine tauntings. Juan teaches Chiron how to swim for himself in the sea, as the camera lingers over the touch of Black skin and the mesmerizing mutation of turquoise green waves. Indeed, the pastel tones and lush colors reflect the light of Miami, but also the dreamlike quality of what Jenkins has referred to as the “beautiful nightmare” that is this city. Drying off at the end of the scene, Juan reveals to Chiron that he is from Cuba, where there are a lot of Black people, despite the fact that you don’t see them here, an allusion to the visibility of white Cubans in Miami’s elite political and economic machinery. Through the blue-green glistening sea, we are reminded of the Middle Passage, its histories of collective death and commodification, but also the sea as a quintessential site of freedom.

The sea is visualized a dozen or more times in the film, as a lingering presence, a witness of adolescent sexual exploration, and as Little’s return home. Coming back for a visit to Miami in adulthood, Chiron meets up with Kevin, his adolescent friend and with whom he shares the powerful memory of teenage desire and touch. At a restaurant by the sea where he works, Kevin prepares Chiron a special dinner. Chiron asks, “Oh, you Cuban now?” “Only in the kitchen, papi,” Kevin responds. Given the ever present ebb and flow of the sea and the hovering moonlight, Kevin might have added “also by the ocean.” Within the arc of small exchanges and moments that are filled with dreamlike potential, the Caribbean is threaded through the main narratives of Moonlight. 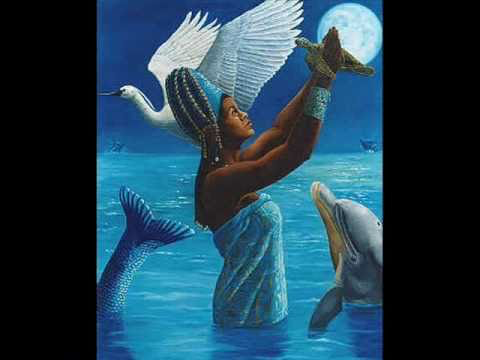 In this sense, ocean water might be read as a powerful symbol of the Orisha and goddess Yemaya. In Santeria, Yemaya is the source of all, the constantly mutating and transforming force that is both protector and the mother of all life that rules over the seven human figures of the pantheon. Given the Yoruba-based worship that traverses Caribbean and Brazilian Afro-diasporic memory (Yemanjá in Brazilian Portuguese), Yemaya represents a powerful and even queer force of the natural world, untamable and in constant mutation and represented by the sea. In an early scene that takes place within Juan’s mother’s apartment, the ceramic and humanized figure of Yemaya is dressed in a blue and white robe and sits upon a simple shelf in the backdrop, a symbol of Paula’s possible immigrant and diasporic roots. In fact, the color blue as sea, in the openings towards the sky, and as painted walls within domestic spaces, as well as at Chiron’s high school, is so prominent as to become the powerful symbolic language of what might be called a “blue cinema” that color adjusts, to invoke Marlon Briggs brilliant documentary, for Black diasporic visuality and memory. Even amidst the alienating and violent environments that Chiron is exposed to and must survive within, the spiritual symbolic of the African diaspora explodes in the most of the scenic backdrops. Thus, while Moonlight inhabits the conditions of structural violence, it also invokes its spatialized transits — between the Caribbean islands, the economies of empire and sexual tourism, the non-spaces of historical memory. Meanwhile, the color blue, the sky, the ocean become the means of metaphorical escape. This secondary symbolic level, is where the director touches other dimensions of experience that pass through Black diasporic cultural memory and embodiment, reaching into the shadowy and liquid transits of the Caribbean basin and the trans-Atlantic. With the title “Moonlight,” other cosmologies are subtly made apparent, the reflection of the sea tides, the references to other ways of knowing, being, seeing and thinking that find routes out of hyper-visible political and material operations.

Moonlight exceeds the frameworks that criminalize queers, diminish Black life, and individualize the logics of racialized gender as determining of particular outcomes. Moonlight is the other space, the parallel world of ancestors, the shadow world, the porous line between living and dead, the drowned and floating worlds as histories of crossing and being otherwise. And, it is also the Orisha world where all is not ruled by the human condition, all is not tamed by capitalist materialism, and all is not predetermined by the structure of violence that forces Chiron to become a muscular man who dare not touch another man, even well into adulthood. The moonlight of the film is cast on Black male bodies, that during adolescence find their intimacy with each other. And in the last scene of the film, holding each other by the light of the moon is the moment of release and of finding one’s own and another’s sense of belonging. 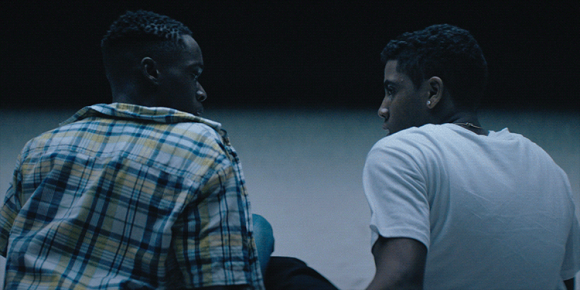 3 replies on “Moonlight, the Sea Body, and the Color Blue by Macarena Gómez-Barris”

[…] refreshing to see that there’s only one self-confessed Cuban there, and a passing mention of black beans. We were not part of the picture, so magical effects of sand and skin and light could once again […]

This is amazing! I felt the symbolism of Yemaya, glad to see Im not the only one. I didnt even notice the statue in the film, the presence was out there enough for me to notice. This is a brilliant writing!